Have you ever seen a movie so bad you wanted to hate it, but something was holding you back and you couldn’t dislike it entirely? I have a theory on the matter: the redeemable quality that saved those movies from your hatred was the soundtrack. We all know the effect that music can have, especially on us as individuals, and I think you might agree that it includes making not-so-good movies into relatively tolerable ones.

Now brace yourself, some of the films on this list may be your favorites or guilty pleasures to watch (a handful of mine are on here, so I feel your pain). However, according to the various sources across the web that helped me put this list together, these movies are apparently quite dreadful. “To each their own” is definitely an applicable phrase for this topic, as is “agreeing to disagree.” Feel free to defend your favorites in the comments and tell us why it is more than just a pretty soundtrack (in fact, I encourage it)!

The Twilight series, based on the books by Stephenie Meyer, is actually the series that inspired this list. I’ve read the books, I own all the movies, and yes, they are most definitely a guilty pleasure of mine. But I am well aware that these movies are not cinematic genius. The soundtracks for all five of them, however, are actually very good and these films are actually what helped introduce me to some fantastic indie-style artists. While the Twilight series includes music from popular artists like Paramore, Muse, Linkin Park, Green Day, The Killers, Cee Lo Green, and even Bruno Mars, it is the other artists – such as Iron & Wine, Lykke Li, Bon Iver, Christina Perri, Passion Pit, and so many, many more – that are the treasure of these films. And before you ask, yes, I own all of the film soundtracks on CD, too.

Starring a young Liv Tyler and Renee Zellweger, as well as a pre-Without a Trace Anthony LaPaglia, Empire Records is the epitome of music-related films: a group of young employees at a record store (that, of course, have seemingly pretentious knowledge of music) fight the system to keep their beloved “Empire Records” from being absorbed from a large music chain. The film’s audience is divided when it comes to the quality of the film and its plot, but one thing is for sure, the soundtrack is totally worth it. The Gin Blossoms, The Cranberries, Quicksand, and Toad the Wet Sprocket, alongside the likes of AC/DC, The Buggles, and Gwar at least makes Empire Records a musically educational film, and will have you quoting “Damn the man! Save the Empire!” repeatedly.

The final film of the beautifully talented Aaliyah, Queen of the Damned is considered an epic fail by viewers, fans of the novel from which it is based, and even the author of the novel itself, Anne Rice. However, I believe it is Korn frontman Jonathan Davis’s involvement with the film, as well as many other well-known names in the alternative rock and nu metal genre, that makes it remotely worthwhile. While Jonathan Davis provided the singing vocals for Stuart Townsend’s “Lestat” in Queen of the Damned, Chester Bennington of Linkin Park, Static-X, Papa Roach, Disturbed, and Marilyn Manson are also included on the film’s soundtrack. If I were making a film about a rockstar vampire, those artists would be at the top of my list as well.

In director Sofia Coppola’s rendition of the ill-fated queen of France, Marie Antoinette is considered to be a beautifully designed and shot film, but somewhere along the way, people seemed to dislike the movie itself. It is in the anachronistic soundtrack (meaning that the film attributes something to a period of time to which it doesn’t originally belong, in this case the soundtrack of an 18th century plotline is comprised of modern music) that Marie Antoinette gets its charm. With Aphex Twins, The Cure, Adam and the Ants, The Strokes, and the famed “I Want Candy” band Bow Wow Wow sharing some screentime with Kirsten Dunst, I’ll leave it up to you to decide if the film and its soundtrack are as good (or bad) as they are rumored to be.

With a film revolving around a playlist, you can expect the music to be good… It’s a shame the film itself couldn’t keep up. Starring Michael Cera as Nick (another guy in a band to go with his Scott Pilgrim role) and Kat Dennings as Norah, this film supposedly overdoes the quirk and is sweet and romantic, but as famous critic Roger Ebert said, it’s “not much of a film.” Nick and Norah’s Infinite Playlist includes tracks by Vampire Weekend, The National, We Are Scientists, Modest Mouse, and what playlist is complete without “Wannabe” by Spice Girls? The question for this film is how much can you once again stand Michael Cera playing the unconventional guy that’s part of a band…? 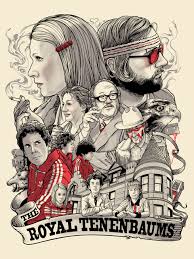 These two films are lumped together because people seem to have some issues with Wes Anderson films, these two in particular. Many people are not fans of the bizarreness that encompasses many of Wes Anderson’s films, and the same can be said about the so-called pompous or self-important impression that is often associated with this indie director. Regardless of your feelings towards Wes, both these films do have spectacular tunes. The Life Aquatic with Steve Zissou is known for its numerous covers of David Bowie songs throughout the film by actor and musician Seu Jorge, which in fact comprises most of the soundtrack. To fill in the cracks, Sigur Rós and Iggy and the Stooges are also included. In prodigy-filled The Royal Tenenbaums, Bob Dylan, Paul Simon (of Simon & Garfunkel), The Ramones, Jim Morrison, John Lennon, AND The Velvet Underground are all classic artists that no doubt help the film stay afloat. It is Elliott Smith’s “Needle in the Hay,” though, that other reviewers say is a notable track in the film. Not surprisingly, the song is played an important point in the film.

The film that put Brandon Lee (son of martial arts idol Bruce Lee) on the map, and sadly the one that also killed him (literally), The Crow is based on the comic book written by James O’Barr to help him deal with the death of his girlfriend. In the film and comic, a guitarist who is murdered alongside his fiancee returns from the grave to avenge their death, with the help and guidance of the crow that revived him. Yeah… that sounds a little cheesy but The Crow does have many loyal fans. The Cure, Stone Temple Pilots, Violent Femmes, Nine Inch Nails, Rage Against the Machine, and Pantera give The Crow the edge that’s perfect for a revenge-filled film, with “Big Empty” by Stone Temple Pilots being the biggest hit from the soundtrack.

In light of their Grammy wins, it’s no shock that a film chock-full of Daft Punk is successful. However, it is the sequel-ness of TRON: Legacy that falls short, as sequels often have a tendency to do. Starring Garrett Hedlund as the son of a “CGI-ed to look younger” Jeff Bridges, as well as Olivia Wilde for good measure, TRON: Legacy is supposedly a visually stunning journey through the cyber universe… but I guess that’s about it. While Journey and the Eurythmics are listed as artists within the film, the TRON: Legacy soundtrack is entirely composed by French duo Daft Punk, which includes their first film score. If you ever wondered or debated the talents of Daft Punk, this is the film to test it with.

Indie favorite starring Zach Braff and Natalie Portman, Garden State is a film that even I have yet to decide how I feel about it. It’s got the eccentricity and it’s got Natalie Portman, so what’s not to like, right? Well apparently there’s something because it seems there is only a small percentage of people that rank Garden State at the top of their movie lists; I mean, it is the somewhat cliche story of a big-time-somebody returning home to small-town-nowhere and connecting with an intriguing young woman that’s been done a million times over, but there are a handful of us that connect with it. Add The Shins, Frou Frou, Coldplay, and a dash of Lionel Richie and Simon & Garfunkel, there’s a helluva lot of quirk to be found in Garden State. Almost enough to make New Jersey seem appealing.

Of all the lists I read about bad movies with great soundtracks, Purple Rain was on every single one of them. And I mean every one. For good measure, I asked my dad just to make sure – because hello! This is Prince we’re talking about here – and yes, sadly Purple Rain is incredibly cheesy and ridiculous but the music was good. Reaaaaal good. As Prince’s film debut and supposedly a semi-autobiographical film about the artist himself, Purple Rain was filmed entirely in Minneapolis and includes the famous (or maybe infamous) music venue, First Avenue. Minnesota natives like myself are sure to like this film more than others, simply for the fact that we can say we’ve been to places or at least know where they are, but no one can deny songs like “Let’s Go Crazy,” “When Doves Cry,” and the eponymous track “Purple Rain.” If you don’t like Prince, I’d say you’re lying.